More than 200,000 people are estimated to have taken part in a controversial independence-day march through central Warsaw on Sunday, after a last-minute agreement was struck between senior politicians and the event’s far-right organisers.

The March of Independence, organised by nationalist and far-right groups and held annually in the Polish capital on 11 November to commemorate the anniversary of the re-establishment of the country’s independence in 1918, has grown dramatically in scale over the past decade, attracting activists from across Europe. 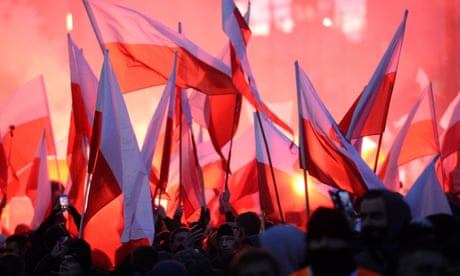 Last year’s event, which attracted an estimated 60,000 people, received international condemnation for the presence of racist and xenophobic banners and slogans and violence directed at counterprotesters.

There was widespread concern in Poland that the march would overshadow official commemorations of the centenary of the country’s rebirth as an independent state at the end of the first world war. Preparations were thrown into chaos on Wednesday after Warsaw’s outgoing mayor, Hanna Gronkiewicz-Waltz, announced she was banning the march due to concerns surrounding security and “aggressive nationalism”.

Hours after Gronkiewicz-Waltz’s announcement Andrzej Duda, Poland’s rightwing president, announced the Polish state would be organising its own march at the same time and along the same route as the nationalist march. But it was unclear what would happen if a court overturned the mayor’s ban, which it did on Thursday evening.

Lining up in parallel columns, Polish soldiers stood side-by-side with members of the National-Radical Camp (ONR), the successor to a pre-war Polish fascist movement, and representatives of Forza Nuova, an Italian neo-fascist movement, as they were addressed by Duda at the march’s inauguration.

“I want us to walk under our white-and-red banners together and in an air of joy. To give honour to those who fought for Poland, and to be glad that it is free, sovereign and independent,” Duda said, before leading the crowd in chants of “glory and praise to the heroes” and a rendition of the national anthem.

Dwarfing previous iterations of the march in terms of size, this year’s event appeared to feature far fewer overtly racist banners and symbols than last year, although white supremacist symbols such as the Celtic cross were present, and some media outlets reported instances of racist chanting.

The far-right All-Polish Youth, a co-organiser of the march, posted a video of an EU flag being set on fire on the march, as some people chanted “down with the European Union.”

Poland’s political divisions were also on display, as police in riot gear separated marchers from counter-demonstrators gathered under a large banner reading “Constitution”. Some marchers threw objects and fireworks, making obscene gestures and labelling their opponents prostitutes and communists.

Many of those marching sought to distance themselves from any controversy, saying they simply wished to celebrate their country’s independence.

“I just want to celebrate the 100th anniversary. To see all these Polish flags, it’s a beautiful view. I am not involved in politics, I am not involved in the war between politicians,” said Piotr, a biotechnologist from Kraków who was attending the march for the first time. “The atmosphere is very good – except for a couple of groups whose slogans are not OK.”