Jared Taylor, one of the most prominent white supremacists in the U.S., claimed on his website on Friday that he’d been “banned from Europe” until 2021.

The ban came as Taylor attempted to transfer in Switzerland for a flight to Finland. According to Taylor, Swiss police informed him that Polish authorities had barred Taylor from traveling through the Schengen Zone, a 26-country area of Europe allowing visa-free travel.

“I will spend the night at the airport, and tomorrow I will be deported,” Taylor wrote. “I am free to walk around the terminal, I can make phone calls and use the internet, and I have a meal voucher that is supposed to last me for the next 12 hours. The officer kept my passport, though, and won’t give it back to me until I board the flight home.”

Jared Taylor of American Renaissance says he has been banned from Europe until 2021, seemingly at the instigation of Poland, where he has given talks to nationalist groups (via @FFRAFAction)

Taylor had been planning on speaking at white supremacist conferences in Scandinavia, including one on Saturday in Stockholm that featured other well-known fascists like Mark Collett and Greg Johnson. 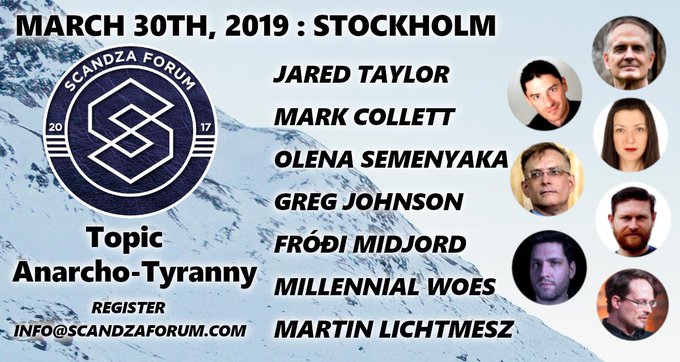 Today in Stockholm Sweden there is an international alt-right/Identitarian conference – Scandza Forum.

This is now an annual event. It was held in Oslo in 2017 & Stockholm last year

It’s unclear why Polish authorities issued a blanket ban against Taylor. Taylor attributed the ban to a 2018 trip to the country, where he gave multiple television interviews. During that trip, Taylor said that Polish police said he was “spreading a totalitarian ideology.”

Taylor is best-known for cloaking his white supremacy behind a facade of so-called “race realism,” which claims that intellectual differences between races are inherent. He gained prominence in 2016, when Richard Spencer — one of the most well-known faces of the so-called “alt-right” movement that backed then-candidate Donald Trump — cited Taylor as his mentor.

The move to bar Taylor — and having European countries enforce their borders against unwanted individuals — sent other white supremacists into fits. One, Hunter Wallace, said the “moral rot of Europe can’t possibly get much deeper,” a take echoed by Scott Greer, who wrote for Richard Spencer’s white supremacist journal. Nicholas Fuentes, who attended the 2017 white supremacist rally in Charlottesville, Virginia, described it as a “stab in the back.”