Political analyst and advisor to President Chavez, Fernando Bossi, looks at the striking parallels between the reactionary offensives in two Latin American countries.

Argentinian internationalist Fernando Bossi has a lifelong commitment to Latin American unification that has expressed itself in diverse educational and political projects. Among these were the People’s Amphictyonic Congresses that took place in 2003 and 2004, which were a recasting of Simon Bolivar’s two-century-old project of the same name that aimed at forging links among the newly-formed Latin American republics. Bossi has continued his work as an educator, writer and militant as organizational secretary of the Bolivarian Congress of the Peoples and director of the Portal Alba website.

In your view, what are the most important similarities and differences between the violent protests in Venezuela (2014 and 2017) and those in Nicaragua (2018)?

In both countries, the violent protests follow the same script, and the main actors (and even the cast) coincide. They are the local oligarchies, the Church, the for-hire media, a part of the student body and mercenaries recruited from criminal gangs – all of them conspiring and acting in a coordinated way. Behind them, US imperialism was surely present through its tentacles: NGOs, media, business chambers, right-wing parties and governments, and so on.

In both cases there is the same overall scheme, the same recipe and the same way of operating, which involves trying to make people think, internationally and even nationally, that it is about a “just struggle” against “dictatorial and undemocratic governments.”

The parallels between these counter-revolutionary projects are not casual. They form part of a plan drawn up in imperialist power centers.

There are differences (which relate to the two different realities, two particular political processes), but what is striking are not so much the differences, but the similarities.

Today we are witnessing a worldwide upsurge of fascism, with fascist parties and rulers in power in some places, such as Trump in the United States, Modi in India, Duarte in the Philippines and Erdogan in Turkey. Are there connections between the protests in Nicaragua and Venezuela and this global wave of fascism?

There is no doubt that imperialist fascism operates tangibly in our region, trying to bring down popular governments that, in one way or another, defend their country’s sovereignty and self-determination. Whether imperialism attempts to do so through street violence, judicialization of politics, economic blockade, discrediting of leaders, planned corruption or even military intervention, the aim is always to wear down progressive governments until they capitulate.

In the scheme of neoliberal globalization, there is no room for governments that aim to advance towards integral independence, much less for those who have decided to do so through socialism. In Venezuela’s case, it is clear that the main objective of imperialist capitalism is to appropriate its oil wealth (the world’s largest proven oil reserve). In Nicaragua, it is to avoid the creation of the interoceanic canal planned in partnership with the Chinese. For this reason, imperialism needs to get rid of Sandinistas and Bolivarians.

Whoever believes that these violent street actions are motivated by a lack of democracy, abuse of human rights or acts of corruption, is making a grave error. Fascist imperialism – which is anti-democratic, genocidal and corrupt by nature – is only interested in guaranteeing capitalist continuity and accumulation, and for that it needs docile governments that facilitate that goal. Or are we supposed to believe that now the US government really cares about democracy or respect for human rights in other countries?

Apparently, the Venezuelan government was the winning party in its struggle with fascist groups both in 2014 and in 2017. Nevertheless, it is well known that in the negotiations that took place in 2014 during the first fascist upsurge, the opposition (and above all the bourgeoisie) made important advances. From your perspective, what are the criteria for victory and defeat in this kind of confrontation, since we know that you can maintain a government but lose a political project?

Because the street violence was stopped, we can say that Venezuela won the battle against the fascist opposition. But this by no means implies that it defeated the far right. The attempted assassination of the president on August 4 is a sign that the extreme right has not been defeated.

During every revolutionary process, there are moments both of progress and also of setbacks. In confronting imperialism and its allies, there have been successes and mistakes on our part, but also on the part of the enemy. It’s dialectical: there are achievements and errors on both sides of the conflict, as well as subjective and objective factors that play a decisive role. That is class struggle, effectively.

It is difficult to reach a definitive conclusion about victories or defeats when we are talking about a series of vertiginous and recent events. The process of class struggle is still underway, still without definition, and without a concrete conclusion. There is a kind of unstable equilibrium in which at times the balance tilts to one side and then to the other.

I do not believe that, in Venezuela or Nicaragua, the projects of the United Socialist Party (PSUV) or the National Liberation Sandinista Front (FSLN) can be reduced to merely preserving political power. Instead, in both cases they have tried to implement a national liberation project with a socialist perspective. But, as we know, this is not easy and it depends on a vast number of factors. For example, the fall of the popular governments of Brazil and Argentina has weakened the correlation of forces in the whole region, as has the drop in the price of oil. Furthermore, certain hesitations, vacillations and errors on the part of the Venezuelan and Nicaraguan governments have to be taken into account. Yet none of these governments has capitulated – not at all.

The Venezuelan revolution, in particular, is subject to a fierce imperialist offensive. One hopes that we will be able to put together forces and ideas and take concrete steps to unleash a powerful counter-offensive that will bring an end to the counterrevolutionary pressure. 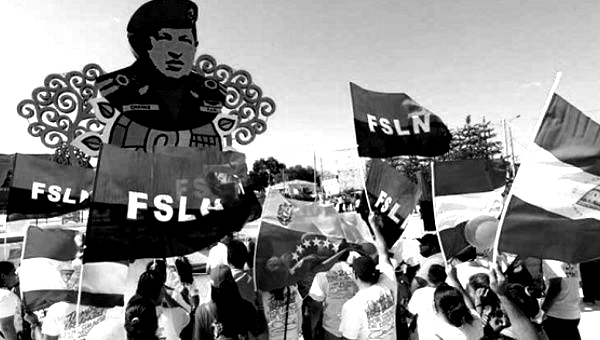 FSLN in a solidarity concentration by the Hugo Chávez monument in Managua, Nicaragua. (FSLN)

Some believe that the governments of Daniel Ortega and Nicolas Maduro have not cast their lot sufficiently with the masses and their project. In that way, they have given openings and opportunities to the opposition, which has been able to incorporate some elements of the popular classes into their rank and file. In your view, what are the main errors of the Sandinista and Bolivarian governments, and how should they be corrected?

My belief is that you cannot carry out in a revolutionary process completely without directly confronting the enemies of the people and of the homeland. As long as we don’t get to the root of the problem, every process of radical change will be impeded.

In Venezuela, I maintain that we cannot coexist with the importing bourgeoisie. They are the keystone of the whole oligarchical and pro-imperialist structure that remains intact and on the offensive. I think it is necessary to nationalize banking and foreign commerce, thus securing two pillars of sovereign development and social justice. That’s my point of view.

If I may touch upon a mistake made by both governments, it’s not knowing how to make the most of the unity that exists between the people and the army. In both countries, it is of utmost importance and a necessary element for deepening the revolution. That unity, brought about through the realization of Bolivar and Sandino’s ideas, has to be employed with greater force and determination. Tellingly, it is just there that our enemies direct their attacks: they want to break that strategic unity. Hence, any step forward, any measure that aims to deepen our revolution, must operate within the framework of that unity and also with the permanent mobilization of the people. A unified and politically-conscious people – both civilian and military – is what can guarantee our ability to go forward in the face of counterrevolutionary attacks.

Do you have any special recommendations for our international readers about how to respond to the attacks against Nicaragua and Venezuela?

First, don’t be fooled by the mass media which works for big capital. Also, be on the alert about the supposedly “left” positions of some renowned intellectuals who, consciously or unconsciously, play into the hands of the historical enemies of our peoples. Understand that these popular governments have defects and virtues, but that they have restored dignity and sovereignty to their respective countries. Fundamentally, act with solidarity and a lot of honesty and respect for both Sandinismo and Bolivarianismo, which are right now waging a difficult and heroic battle against the longstanding enemies of the working class and of oppressed peoples.