Here are two awful things in a vast timeline of awful things: Over the weekend, Brazilians elected aspiring dictator Jair Bolsonaro to be their next president. You can find plenty of explainers online as to why Bolsonaro is a monster (naturally, President Trump offered him warm congratulations on his victory), but I can go ahead and give you a topline. Bolsonaro said he’d like to kill 30,000 people. He said he’d rather have his son die than be gay. He likes torture. He once told a political opponent that she wasn’t worth raping. Oh, and he’d like to open up wide swaths of the Amazon rainforest to miners, loggers, and farmers, endangering the most precious ecosystem on Earth.

At a 2017 event in Rio de Janeiro, Bolsonaro promised crowds that if elected, he would not give “one centimeter” of demarcated territory to indigenous people.

The rainforest was already under assault well before Bolsonaro’s electoral victory, but since Bolsonaro doesn’t believe in global warming (or, like so many other right wing assholes, doesn’t want to believe in it), he’s poised to accelerate an environmental catastrophe that we’ve already been warned we must stop altogether. An estimated 20 percent of Earth’s oxygen supply comes from the Amazon rainforest. It contains over 10 million known species, and millions more that are unknown. It’s home to what could be the last tribe of humans never to have contact with the outside world. Allowing industrialists to freely pillage the rainforest is both immoral and impractical given that we all want to, you know, live. Like the United States, Brazilians were apparently sick of governmental ineffectualness and corruption, but they chose to elect a man who promises to worsen both of those things. Bolsonaro literally campaigned on death and destruction. These are facts, and yet here is how two supposedly respectable media outlets portrayed his terrifying ascent: 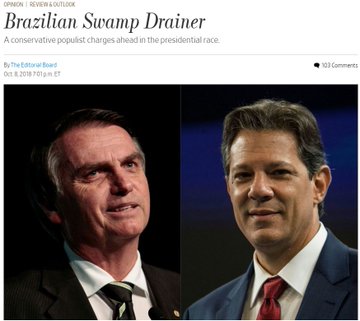 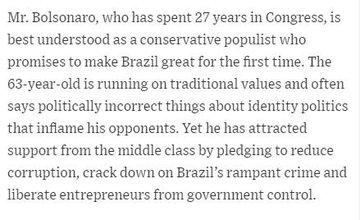 Critics have lambasted the former paratrooper for his homophobic, racist and misogynist statements, but his government could open new investment opportunities https://www.cbc.ca/news/world/brazil-canada-trade-bolsonaro-politics-foreign-policy-1.4878379 …

Canadian firms invested about $11.5 billion in Brazil last year, mostly in mining, infrastructure, machinery, finance and technology. Some businesses are expected to see new opportunities under a…

Here is another awful thing: President Trump. This morning, the dutiful access merchants at Axios “broke” the story that the president would like to issue an executive order to end birthright citizenship in the United States, mainly so he can kick out any minorities he pleases. Please note that the president cannot issue such an order. It would require a change to the U.S. Constitution, which means it would have to go through the courts, which are currently being stocked with fresh wingnut judges as part of a brand new legal system where rich people and Evangelicals can shop around for any ruling that pleases them. Maybe the president can get his order cleared through those hoops down the line. But for now, he’s clearly bullshitting everyone just to get racists excited for an election. Did this matter at all to Jonathan Swan or the rest of his execrable colleagues? Reader, it did not:

Excited to share with you the first snippet from our interview with President Trump yesterday, ahead of the launch of Axios’ HBO show this Sunday evening. 1/2

EXCITING! I have screamed myself hoarse at the seemingly endless parade of media bootlickers and social media mavens who are willing to not only provide a bullhorn to fascists like Bolsonaro and Trump, but will also take their word as gospel and provide the additional service of laundering their lies and hate into tasteful, family-friendly language. I can shame them all I like, but these people never learn because they don’t WANT to learn. They’re all in on this scam. They are all in on this great, terrible hoarding of money and resources that is spreading like cancer across the globe at the moment. There is a great deal of money to be made in the Industrial Hate Complex right now, whether you are part of it or simply abetting it, as HBO is apparently more than willing to assist Axios in doing.

This isn’t terribly new, of course. The supposed idealism buttressing so many historical dictatorships and genocidal regimes has been not-so-secretly rooted in greed and selfishness. What’s different about this great hoarding is that it’s happening in the Internet Era, which means anyone anywhere can get in on the hate if think there’s money to be made on it, and they can garner enough support for their hate to pass it off as a viable political or economic entity. You don’t even need to have the excuse of being desperate and hungry. In fact, it appears to be the most well-off of citizens dying to cash in: Megyn Kelly got nearly $70 million from NBC and she’s clearly not satisfied with retreating to a quiet life of obscene luxury. Everyone who has more wants more now, and fascism is proving to be an efficient and lucrative engine to amass it, regardless of whether or not this ends with us all choking to death on our own air.

This is an epidemic of cowardice that has been going on for over two years, and it’s worsening when it needs to get better. General Motors invested $4.5 billion in Brazil a year ago. Will Bolsonaro’s election spur them to divest? There’s certainly no sign of it at the moment. A racist shot up a synagogue and killed 11 people. Did a corrupt White House even bother to pay lip service to gun control or the obvious rise of white nationalist terrorism? LOL of course not. They don’t give a fuck, and joints like Axios clearly don’t give a fuck that the administration doesn’t give a fuck. The president is sending troops to the border ostensibly to start shooting at migrant people on sight, and FOX News treats the migrants like the emergency. FOX broadcasts lie after lie after lie and will seemingly NEVER be punished by major advertisers or by their carriage providers, all of whom continually profit off its tacit endorsement of hatred and violence. One asshole in Kansas tried to bomb a Mosque and then blamed it on hatefluenza. Even that guy knows to try leveraging that shit.

Like so many other people, I was shocked, naively so, at not only Trump’s victory, but at the speed with which his fascist disdain for both facts and human life have infected our country and the world at large. I grew up being told fascism was, you know, bad. Seemed really obvious! Now the most powerful people in the world have either embraced its return, or are too deliberately oblivious to acknowledge it. This has been a shameful, violent, disgusting two years in world history. It should never be forgotten or forgiven, but it seems to be forgotten roughly every two minutes. That’s because of money. There’s money in fascism. There’s money in forgetting, and we may all soon be forgotten because of it.