By now you have probably heard about Gritty, the mascot for the Philadelphia Flyers hockey team who has become nothing less than a phenomenon since debuting last September. Gritty has quickly become an NHL all-star and symbol of everything Philly, but there is much more to the orange, wide-eyed monster. Look no further than a resolution introduced by members of the Philadelphia City Council:

Gritty has been described as a 7-foot tall orange hellion, a fuzzy eldritch horror, a ghastly empty-eyed Muppet with a Delco beard, a cross of Snuffleupagus and Oscar the Grouch, a deranged orange lunatic, an acid trip of a mascot, a shaggy orange Wookiee-esque grotesquerie, a non-binary leftist icon, an orange menace, a raging id, and an antihero. He has been characterized as huggable but also potentially insurrectionary, ridiculous, horrifying, unsettling, and absurd….

“Non-binary leftist icon?” Absolutely. While the official Flyers’ Gritty has dodged questions about politics, the magic of memes has made it clear that “Gritty is antifa,” and no amount of grumbling at the Wall Street Journal is going to change that. As the anarchist writers with the CrimethInc. Collective recently noted, “On the level of meme warfare, the anti-fascist Gritty supplanted the alt-right Pepe the Frog as the most recognizable politicized cartoon character. This is a hard-won victory — if a weird one.”

To learn more, Truthout interviewed Fellow Worker Gritty, a well-known Gritty incarnation and Twitter personality who has become a mascot for anti-fascists and Wobblies everywhere. While Fellow Worker Gritty has put out less than 375 tweets as of this writing, their account has gained nearly 15,000 followers in a matter of months. Fellow Worker Gritty tweets plenty of funny memes, for sure, but the account also fundraises for activist causes and sends call-outs for actions. As we learned, Fellow Worker Gritty is not just a meme or a worker. They are a cultural critic, organizer and an icon haunting the dreams of fascists.

Truthout: Who is Fellow Worker Gritty? Just your average anti-capitalist hockey monster from Philly? I’ve read a number of think pieces about Gritty, and I wonder if they are over-thinking it.

Fellow Worker Gritty: Fellow Worker Gritty (FWG) is a conglomeration of every anti-capitalist notion in Philadelphia. Gritty is genderless and anti-fascist and recognizes the intersections of privilege and oppression that dictate how individuals move through the world. It is impossible to over-think Gritty because Gritty is the manifestation of thoughts — a corporate entity in a consumable mask that is used for nationalist propaganda (as sports advertising often is. Think of every single commercial for a bag of chips that has images like AMERICA’S FAVORITE BRAND OF SPORTS CHIPS or whatever) — that is appropriated by the people meant to be placated by nationalism, and used by them to propagandize their own anti-capitalist ideology. Leftist-Gritty is a manifestation of working-class solidarity — all of the FWG followers and retweeters, comrades behind the scenes doing word-magic, everyone who’s ever hated their boss, etc. — but also a manifestation of working-class stubbornness. Dear corporate America, anti-capitalists and leftists and Wobblies and radicals and all the other “freaks” of Philadelphia and the world will continue to take everything profitable and make it accessible for the masses, just like we did with Gritty, and y’all won’t have anything left but your empty mansions. And then we’ll take those too >:).

As CrimethInc. pointed out, “The anti-fascist Gritty supplanted the alt-right Pepe the Frog as the most recognizable politicized cartoon character.” What does it take to inspire the masses to challenge the alt-right and fascists, or “bash the fash”?

The inspiration is less to bash, but more to mobilize; the people have always wanted to bash the fash, and Gritty simply provides a mascot to rally behind. Consider this: The moment Richard Spencer got absolutely fuckin’ decked in the face in that viral YouTube video while talking about Pepe the Frog, Pepe instantly began to lose credibility as an “ideological” symbol (“ideology” is in quotes because fascist “ideology” is just “bullshit”). At the same time, antifa (short for anti-fascists) became a public discussion point in the aftermath of the J20 mass arrests [during President Trump’s inauguration]. This chasm between the “alt-right” and the far-left is where praxis plays out in the form of propaganda meant to appeal to more center-leaning folks, in an effort to bring them closer to either extreme. Two years ago, liberals were calling antifa “terrorists” and denouncing the left. Now, liberals, democratic socialists, and lots of other center-ish leftists are proudly identifying as supporters of Fellow Worker Gritty — who, as I said in the beginning, is absolutely anti-fascist. IN SHORT: Mass mobilization is the key to successfully overthrowing capitalism, the “alt-right” is bad at memes, Gritty Is Antifa. 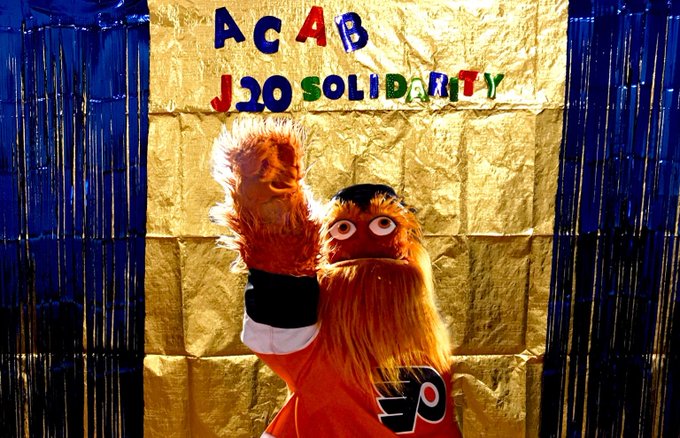 Gritty’s comrades from @Liberation_PHL hosted a Really Really Free Market and potluck today in response to a #J20 call for increased mutual aid. This voluntary exchange of goods is necessary to build a community that will thrive after a permanent #GovernmentShutdown. @IGD_News 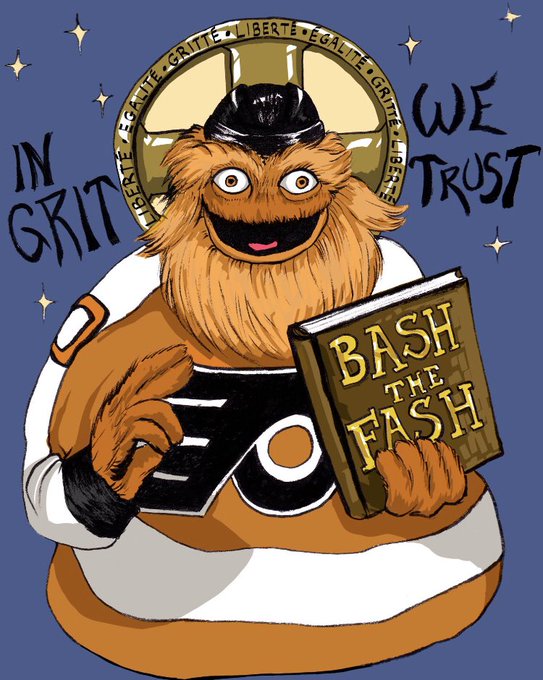 What are some things you love about Philadelphia?

– growing opposition to the racist tradition of the Mummers parade

– taking a nap in potholes because potholes in Philly are big enough for Gritty to sleep in >:)

– NOT THE PPD #FUCKCOPS #ACAB

Should the bosses be concerned about Fellow Worker Gritty?

Pshh, yes duh, Fellow Worker Gritty is going to eat all the bosses and build a bridge to wage equity with their bones.

The interview has been edited for brevity and clarity. 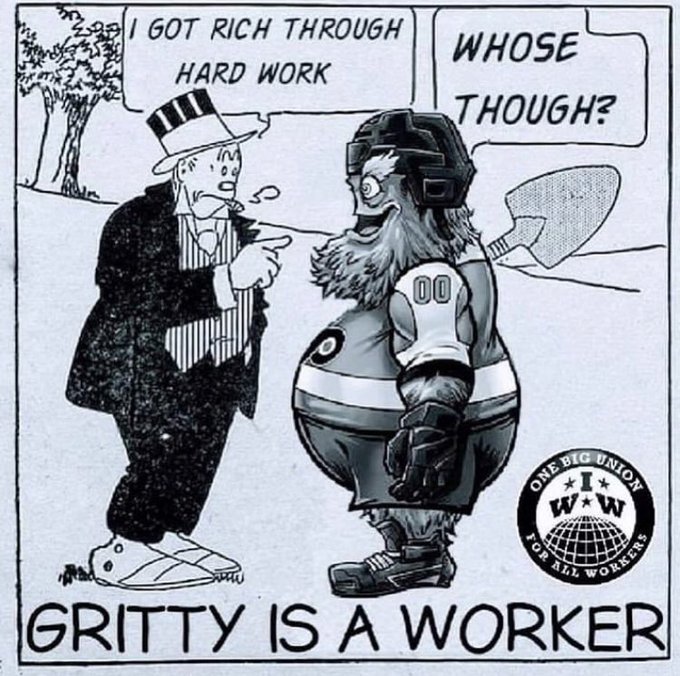