An FBI indictment of four American white supremacists belonging to the Rise Above Movement (RAM) in connection to violence they committed in Charlottesville, Virginia, and California in 2017 revealed that they had previously traveled to Ukraine to get training from a neo-Nazi militia.

The four men, who all hail from California, were “among the most violent individuals present” at the protest in Charlottesville, which saw brutal clashes and a car attack by an admirer of Adolf Hitler that left a woman dead and several others seriously wounded. That’s according to US Attorney Thomas Cullen.

Some of the RAM members chanted “Jews will not replace us” and were caught on video beating non-violent counter-protesters. 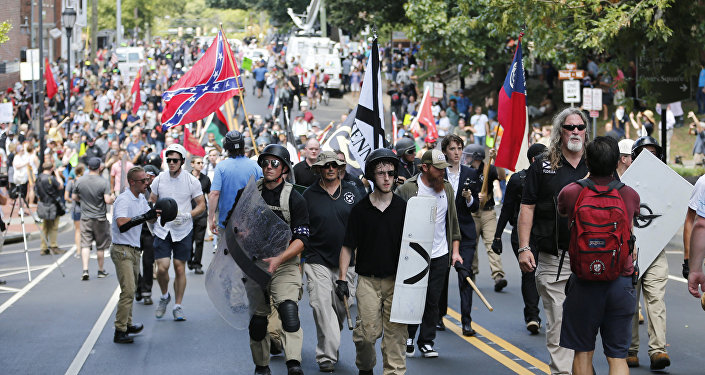 RAM was founded in 2017 by Robert Rundo, a Queens, New York, man who spent just over a year in prison after stabbing a member of a rival gang in 2009, Sputnik News reported. Miselis recruited nearly two dozen members of the Nazi skinhead gang Hammerskin Nation, a group believed to be behind at least nine murders, to join RAM.

According to the FBI indictment, the Ukrainian Azov Battalion “is believed to have participated in training and radicalizing United States-based white supremacy organizations.”

Members of the group posted photos of themselves on Instragram showing them meeting with Olena Semanyaka, the head of the international department of the Ukrainian National Corps, the political party that grew out of Azov.

The Azov Battalion, like other fascist groups in Ukraine, came into prominence following the Euromaidan revolution. Journalist and author Max Blumenthal told Sputnik News that the insurgency brought out “historical currents of fascism which were dormant.” Now, “it’s able to flourish in a way that we haven’t seen in any other country in the world.”

“These fascist forces were able to form their own militia, which became a regiment incorporated into the Ukrainian military through the National Guard under the watch of the interior minister. And they created a state within the state that was supported by the United States with aid money and weapons and even direct training,” Blumenthal said.

“Ukraine is completely unique in post-Cold War history in that it has become the international hub for fascist organizing and indoctrination,” he added.

Now, with fascists from groups like Azov, C14 (known for pillaging Roma camps), Right Sector and alumni of the neo-Nazi Svoboda Party occupying various positions in government, all the way up to the second in line to the presidency, the aim appears to be a fascist reconquest of Europe.

“Semanyaka and other Ukrainian fascist ideologues refer to the regional springboard for the European reconquest as the ‘Intermarium,'” Blumenthal wrote for MintPress News. The Intermariam is a World War I-era concept of a regional block stretching the Black and Baltic seas that would serve as a military counterweight to Germany and Russia.

Ultranationalists revived the concept following the Euromaidan, Blumenthal says. “First, in a legitimate realm, through the right-wing Polish President Andrzej Duda, through the Three Seas Initiative, Blumenthal said. “They see it as another layer of NATO.”

The Latvian ambassador to Ukraine hosted one Intermariam event in Kiev, Blumenthal says, and it featured a “who’s who of the neo-Nazi right.”

“Within the far right in Ukraine, this concept has been pushed by Andriy Biletsky, the chief ideologue of Azov, and Olena Semanyaka,” who Blumenthal says plans “all these Intermarium conferences.”

Biletsky hopes, in his words, “to lead the White Races of the world in a final crusade for their survival,” Blumenthal noted in his article. “A crusade against the Semite-led Untermenschen,” wrote Biletsky even more specifically.

“The idea is to anchor European civilization in Ukraine and start building connections to other far-right forces in countries along the Black and Baltic seas, where the anti-migrant sentiment and anti-Russian sentiment has been very strong,” Blumenthal said.

The American support for the Ukrainian government despite it alliances with fascists risks opening Pandora’s Box, Blumenthal argues.

“It’s a lot like the Afghan Mujahideen in the 1980s, and particularly the hardcore Islamist elements that were coming from abroad; these were the most effective fighters against the Soviet Red Army in Afghanistan, and they were celebrated as freedom fighters, and the danger of providing them with arms and unlocking the demon of international jihadism was scarcely discussed.”

Blumenthal described a parallel phenomenon in Syria, “where the most effective fighters were connected to Jabhat al-Nusra, and they were regarded as moderate rebels in the US.” Jabhat al-Nusra is the main al-Qaeda affiliate in the country.

“Because the Azov Battalion is fighting Russia and because it is an effective fighting force in a beleaguered military in a protracted, semi-trench war, criticism of its ideological direction, which is explicitly fascist and explicitly neo-Nazi, in media coverage is going to be extremely suppressed, especially in the era of Russiagate, because Azov is functioning as a frontline American proxy.”

“It’s remarkable that the FBI admitted this in an indictment because it shows a classic case of blowback, where the United States is funding and army a military that contains a fascist regiment which is then training American white supremacists who come home to the United States and commit violence. There’s no clearer definition of blowback than that.”