BRUSSELS — As Prime Minister Viktor Orban steadily established an “illiberal state” in Hungary, dismantling the country’s checks and balances, stacking its constitutional court with loyalists and creating a template for other far-right leaders, a powerful group of European politicians took note.

Mr. Orban is now seen as a threat to Europe’s mainstream leadership, especially the conservative alliance that for years chose to shelter him. Leaders of Europe’s conservative political parties — including Chancellor Angela Merkel of Germany — refrained from reining him in, largely because he was part of their coalition in Brussels, and because they thought they could control him.

Now some leaders in the alliance, known as the European People’s Party, have concluded that was a mistake, and are breaking from Mr. Orban. On Wednesday, the European Parliament voted to suspend Hungary’s voting rights within the European Union — an extreme measure whose outcome hinged on the willingness of conservatives to turn against the prime minister.

The is only the first step in a showdown with Mr. Orban. Punishing Hungary would also require a vote of the leaders of the European Union’s 28 member states, and approval is far from certain.

Either way, Mr. Orban has forced Europe’s center-right movement into a corner, as its leaders consider whether to stand by the liberal values and institutions it has shaped since the genesis of the European project in the 1950s — or to move in his direction.

“This is a battle for the soul of the E.P.P.,” said R. Daniel Kelemen, professor of political science and law at Rutgers University. “Does it want to remain a party of values, of democracy, and human rights? It can’t do that and keep Orban in — it’s one or another.”

Mr. Orban sees it differently. In a speech to the European Parliament on Tuesday, he positioned himself not as an opponent of European values, but as their chief defender. “This is the first case in the history of Europe where a community condemns its own border guards,” he said.

European politics in Brussels is waged between rival coalitions of national parties. The European People’s Party is the center-right alliance that has the European Parliament’s largest bloc of lawmakers, and exerts major influence over other European institutions. Many leaders in the coalition, such as Ms. Merkel, are considered torchbearers of European democracy, and its founding fathers also were the founders of the European project. 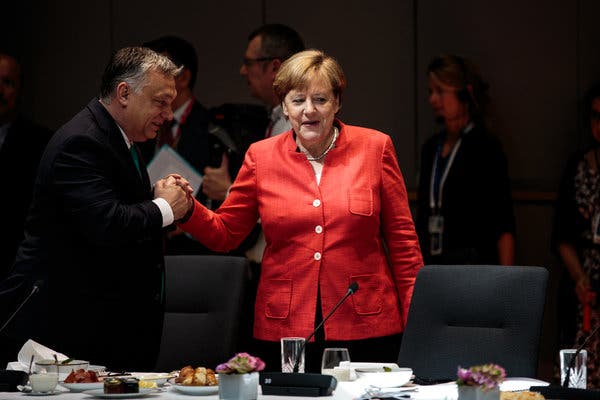 Yet when Mr. Orban began chipping away at Hungarian democracy in 2010, the coalition’s leadership looked the other way. At regular summit meetings in Brussels, Ms. Merkel and leaders such as former President Nicolas Sarkozy of France never formally challenged Mr. Orban’s policies, preferring to focus on other business, according to three people who were present.

Ms. Merkel or other leaders sometimes spoke to Mr. Orban privately, or gently queried his policies at lower-profile gatherings. A senior conservative politician working at the European Union also launched infringement proceedings against him. But for years, leaders of the coalition made no collective effort to confront Mr. Orban — let alone to expel him.

“The line that the E.P.P. took was it was better to have him inside and under our control than outside and out of control,” said Anna Maria Corazza Bildt, a coalition lawmaker in the European Parliament since 2009.

But Mr. Orban has increasingly seemed out of anyone’s control. Over the years, he steadily expanded his illiberal agenda, scorning Ms. Merkel’s migration policies, drawing closer to President Vladimir V. Putin of Russia, restricting the work of Hungarian civil society, and attempting to close a prominent university.

More recently, Mr. Orban has directly challenged the direction of the conservative alliance. In speeches this summer, Mr. Orban presented himself as the true voice of the alliance and real heir to Helmut Kohl, the former German chancellor considered one of its icons.

Mr. Orban also hinted that if the coalition does not change, he could form a far-right alliance that would fight it in next year’s European parliamentary elections. In August, he held a news conference with Italy’s far-right interior minister, Matteo Salvini, and he has long had warm ties with Jaroslaw Kaczynski, the leader of Poland’s governing party, which has emulated Mr. Orban by undermining judicial independence and picking fights with the European leadership.

“It would be easy to, say, establish a new formation from like-minded Central European parties — or, indeed, a Pan-European anti-immigration formation,” Mr. Orban said in a June speech dedicated to Mr. Kohl’s memory. “There is no doubt that we would have great success in the 2019 European elections. But I suggest that we resist this temptation, and stand by Helmut Kohl’s ideals and party family. Instead of desertion, we should take on the more difficult task of renewing the European People’s Party, and helping it to find its way back to its Christian democratic roots.”

The speech irritated and worried many of Mr. Orban’s coalition colleagues, who saw it as offensively presumptuous, as well as a sign of their waning influence over him. Prime Minister Sebastian Kurz of Austria, a member of the conservative alliance, said his party would vote against Mr. Orban on Wednesday, joining center-right parties from Scandinavia, the Netherlands and Luxembourg who have long lost patience with the Hungarian leader.

“Now we see that he wants to change us rather than us changing him,” said Ms. Corazza Bildt, who is calling for Mr. Orban’s Fidesz Party to be expelled from the conservative coalition.

During the early years of his power grab in Hungary, Mr. Orban received plenty of external criticism: more than a dozen objections from the Venice Commission, Europe’s most influential rights watchdog; official censureby the European Parliament; and the threat of infringement proceduresfrom the European Union itself, led by Viviane Reding, a member of the European People’s Party who was then an official at the European Commission, the union’s civil service.

But he deflected criticism from most of his allies by appearing to compromise, while often doing little to moderate his program.

In response to pressure from European institutions, Mr. Orban lessened executive control of the judiciary, but left one of his oldest friends in charge of it. He paused an attempted takeover of the Hungarian central bank, but later appointed a loyalist as its chief. He agreed to reinstate hundreds of forcibly retired judges, but mostly in more junior positions.

In boasts to Hungarian allies, Mr. Orban admitted duping his colleagues. “Part of the skill of this dance is nodding our heads in agreement with two or three of their seven proposals — we had in any case already implemented them but they hadn’t noticed,” he told supporters in a speech at the time. “This complicated game is a type of ‘dance of the peacock.’ ”

Though the European People’s Party would have remained the largest alliance in the Parliament without Mr. Orban’s 12 members, a desire to preserve a majority also influenced its leadership. The coalition’s advantage over its rivals was “not monumental,” and the Fidesz delegates were “numerically a relevant asset,” said Frank Engel, a Luxembourgish lawmaker from the alliance and a longtime critic of Mr. Orban.

In practical terms, Fidesz members of the European Parliament were considered reliable and efficient. And whatever qualms some coalition members had about Mr. Orban’s domestic policy, they felt it was none of their business as long as his vision for the continent remained broadly in line with theirs.

“There is nothing that Mr. Orban has done all these years,” said Mr. David, the Portuguese former coalition vice-president, who remains one of his strongest advocates, “that is against the deepening of the European Union and the European project.”

Since 2015, however, several leaders in the coalition have questioned that assumption.

That spring, Mr. Orban suggested legalizing the death penalty, which would be against European Union rules. By the late summer, he was in bitter dispute with both Ms. Merkel and the European Union leadership over the European migration crisis, and by 2016 he was frequently using Brussels as a punching bag to win domestic support. Even if some European People’s Party leaders privately shared his hard-line stance on migration, the venom of his criticism, and his subsequent circulation of a pamphlet filled with falsehoods about the European Union, led many to conclude that he had crossed a line.