On Tuesday morning, both insult and injury were inflicted on the Indian democracy when in a nationwide sweep, the Pune Police raided the homes of several human rights activists and arrested five of them – Arun Ferreira, Sudha Bharadwaj, Varavara Rao, Gautam Navlakha and Vernon Gonsalves. The arrests, which were justified with reference to the violence that took place in the wake of the Bhima Koregaon commemoration in Maharashtra in early January this year, fit into a more general and increasingly pronounced pattern in Indian politics since Narendra Modi came to power and have a wider significance.

Writing in 1980s Britain, cultural theorist Stuart Hall coined the term ‘authoritarian populism’ to refer to a particular kind of conservative politics. Authoritarian populism, he argued, was characterised by the construction of a contradiction between the common people and elites, which is then used to justify the imposition of repressive measures by the state. According to Hall, such a contradiction was constructed in part by depicting specific groups as an ominous Other – that is, as a threat to and an enemy of the interests of the putative people. The Other – typically political dissidents and minority groups – is in turn made the target of repression and punitive discipline, all in the name of a supposed common national interest. In this process, conservative forces tighten their grip on society and the body politic, to the detriment, obviously, of democratic life.

There is much, of course, that is different between the specific context that Hall was addressing and India in 2018, but his insights nevertheless reveal a lot about the nature of the BJP’s current agenda. First of all, of course, Modi came to power in 2014 on the back of a campaign that had portrayed him as a man of action who would bring development to the common people. In peddling this message, Modi and the BJP were tapping into the frustrated ambitions of many ordinary Indians who had failed to reap the benefits of economic growth under the UPA regime. It was also a message suffused with a specific kind of anti-elitism: as someone who had risen from humble beginnings, Modi was picturedas being quintessentially different from the scions of the Nehru-Gandhi family and the Congress dynasty – he knew the ground realities, and could therefore bring achhe din to the average Indian man and woman. 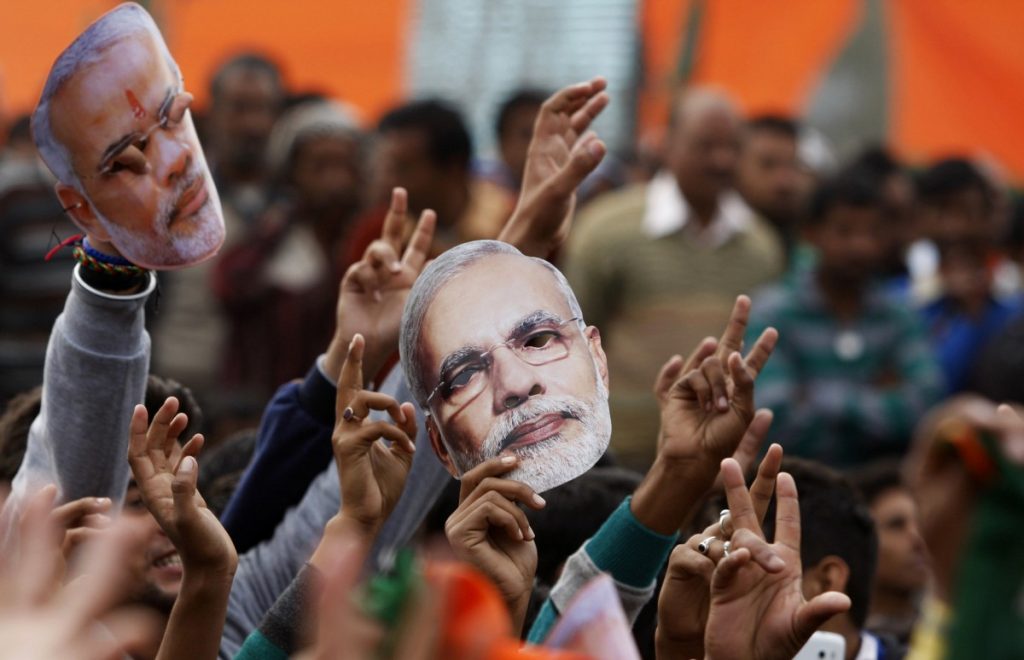 The Modi narrative, however, was never only about achhe din aane waale hain– it was also about drawing a line between true Indians and their enemies, and rallying popular support for a crackdown on those enemies. It is here, in particular, that the BJP regime creates the ominous Other that it needs in order for the current incarnation of Hindutva to thrive. That Other, of course, is the political dissident – the activist, the public intellectual, the student, the lawyer and the journalist who dares to question and challenge a government that is acting in the interest of the people. The ominous Other is accused of being ‘anti-national’ and subjected to harassment, silencing and – as evidenced most recently by the attempt on Umar Khalid’s life, and before that by the killings of M.M. Kalburgi, Govind Pansare, Narendra Dabholkar and Gauri Lankesh – murderous violence. The raids and arrests that took place on Tuesday are a part and parcel of this pattern – a pattern through which an authoritarian India is beginning to emerge.

This coercive dynamic does not only target political dissidents. As has become increasingly clear after the 2014 elections, it also takes aim at vulnerable groups and minorities, such as Muslims and Dalits, through the majoritarian cultural politics that has crystallised around issues such as cow-protection, inter-religious love and religious reconversion. As with the policing of dissent, the making of a cultural and religious Other is a profoundly violent affair: in fact, more than 96% of all vigilante attacks on Muslims and Dalits over the past eight years have taken place since Modi came to power. In other words, political coercion and cultural nationalism are joined at the hip in BJP’s authoritarian populism.

Authoritarianism is always frightening. But it is not necessarily always an unequivocal sign of strength. On the contrary, authoritarian measures – whether in the form of a morning raid, an arrest, or a killing – can be a tell-tale sign of worry among the powerholders. And this is likely to also be true of the Modi regime. Despite the landslide victory in 2014 and several electoral successes in key Indian states, the BJP has undoubtedly encountered both setbacks and challenges during the last two years.

The setbacks have occurred in the electoral arena – for example, in the Karnataka state elections and in several important by-elections, for example in Uttar Pradesh and Bihar. The challenges have arisen outside the parliamentary sphere – in new popular movements that contest Modi’s legitimacy. Key among these are the new forms of Dalit radicalism that have erupted in Gujarat and other parts of the Hindi heartland, as well as the recent agitations by small and marginal farmers, landless labourers and Adivasis in response to the deepening of the crisis in India’s countryside. It is not unlikely that these convulsions signal that the BJP is losing some of its hold over disadvantaged groups that were swayed by its promises of development in the 2014 elections. And it is also, of course, not unlikely that five venerable defenders of India’s democracy are currently facing the prospect of lengthy incarceration without bail because the party’s leadership is aware of this and deeply worried about it.

If cracks are starting to appear in Modi’s armour, it is, of course, necessary for progressive forces to widen those cracks. In India today, that is arguably best achieved through a resolute defence of constitutional democracy in the name of a people that rejects the cruel optimism of an elusive achhe din and refuses to align with coercion and majoritarianism.

Alf Gunvald Nilsen is associate professor at the Department of Global Development and Planning at the University of Agder.