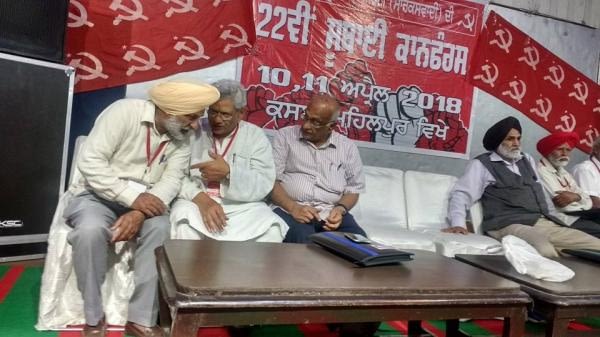 AT A TIME when Punjab is in the throes of a massive social upheaval and there is a complete disconnect between its farmers, farm labourers and those dependent on rural economy and others in towns and cities who are more cued into structures of political power, one would have thought that vast swathes of political […]

Approximately 90 African Americans fought in Spain during the civil war that engulfed that nation between 1936 and 1939.  The war became a proxy war for the European great powers as the Soviet Union supported the newly established Second Spanish Republic while Nazi Germany and Fascist Italy supported the anti-Republic conservatives led by General Francisco […]

A charismatic and militant labor leader, five-time Socialist Party presidential candidate, class-war prisoner jailed by the ostensibly liberal Woodrow Wilson administration for opposing U.S entry into World War 1 and a fiery, moral force in a corrupted era — Eugene Victor Debs was among the greatest orators this nation ever produced, yet no recording of his […]

In this searing exposé, former Wall Street insider Nomi Prins shows how the 2007-2008 financial crisis turbo-boosted the influence of central bankers and triggered a massive shift in the world order. Central banks and international institutions like the IMF have overstepped their traditional mandates by directing the flow of epic sums of fabricated money without […]

During the lead up to the 2016 Coup, a series of alarmist articles in the Brazilian and international media warned of Brazil’s spiraling public debt. In January, 2016, for example, the Economist wrote, “public debt is worryingly large for a middle-income country and rising fast. Because of high interest rates, the cost of servicing it is a […]

Yesterday was May Day, which meant that groups of left-leaning demonstrators took to the streets across the world in support of workers’ rights. In Seattle, according to local media, the May Day march attracted hundreds of people, including a faction of “Proud Boys,” the far-right men’s group that Gavin McInnes founded after he was triggered by a […]

“Now, darkness and secrets are everywhere.  Now there has to be an Us. Because now, there is a Them.” All eyes were on Israel’s military headquarters in Tel Aviv Monday night, as Benjamin Netanyahu literally unveiled his magician’s cabinets, the glittering CDs and snaggle-toothed binders holding what he said were 55,000 pages and 183 discs […]