The destruction of the protest tent camp in front of the Verkhovna Rada on March 3 was the latest sign that Ukraine is undergoing a counter-revolution, led by President Petro Poroshenko and Interior Minister Arsen Avakov.

The events of March 3 recalled the era of the authoritarian kleptocrat Viktor Yanukovych. Freedom of assembly, freedom of speech and economic freedom are under the most threat in Ukraine since Yanukovych was in power.

If there were any doubts before March 3, now we can state with certainty: Ukraine has stopped progressing towards full democracy. At best, it is still a semi-authoritarian or hybrid regime.

Samopomich party lawmaker Yegor Soboliev, an organizer of the tent camp, said that 112 protesters had been arrested by the police, and at least 19 of them had received heavy head injuries.

The police attacked first – so they could not justify the crackdown by pointing to violence on the protesters’ part. Although there have been clashes with the police since October, the movement has remained largely peaceful since its beginning.

A protester with an injured head is treated by medics in front of the Verkhovna Rada on March 3.

The aesthetics of the whole spectacle was also appalling: veterans of the war with Russia being forced to kneel by the police, and being badly beaten.

The brutal treatment of both protesters and journalists by police officers during the crackdown shows the failure of much-touted police “reform.”

Almost half of Yanukovych’s infamous Berkut police, some of whom killed protesters during the EuroMaidan, have remained in the police force. Kyiv Patrol Police Chief Yuriy Zozulia, an icon of the alleged patrol police reform, took part the tent camp’s destruction.

It doesn’t matter that the Rada tent camp was a small marginal movement, not comparable to the large-scale EuroMaidan Revolution.

All citizens should have rights, including freedom of assembly, regardless of their number. Second, the stated goals of those at the tent camp were almost identical to those of the EuroMaidan Revolution. 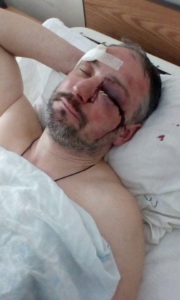 A protester with an injured head lies in a hospital.

In October, thousands of protesters came to the Verkhovna Rada and set up the tent camp to demand the creation of an anti-corruption court, stripping lawmakers of immunity and a fairer and corruption-free election law. The protesters’ demands were absolutely legitimate and had been promised by the incumbent authorities themselves since 2014.

But these promises have not been fulfilled. The authorities ignored them for many months, and made only symbolic concessions.

They approved bills on the three demands at first reading by March 1 – a largely ceremonial and meaningless gesture. Poroshenko’s bill on the anti-corruption corruption court has been heavily criticized by Ukraine’s Western partners and civil society because it does not ensure the selection of independent judges.

As the government failed to meet the demands, and a new demand – Poroshenko’s impeachment or resignation – arose. Thousands have regularly rallied for the demand since October. 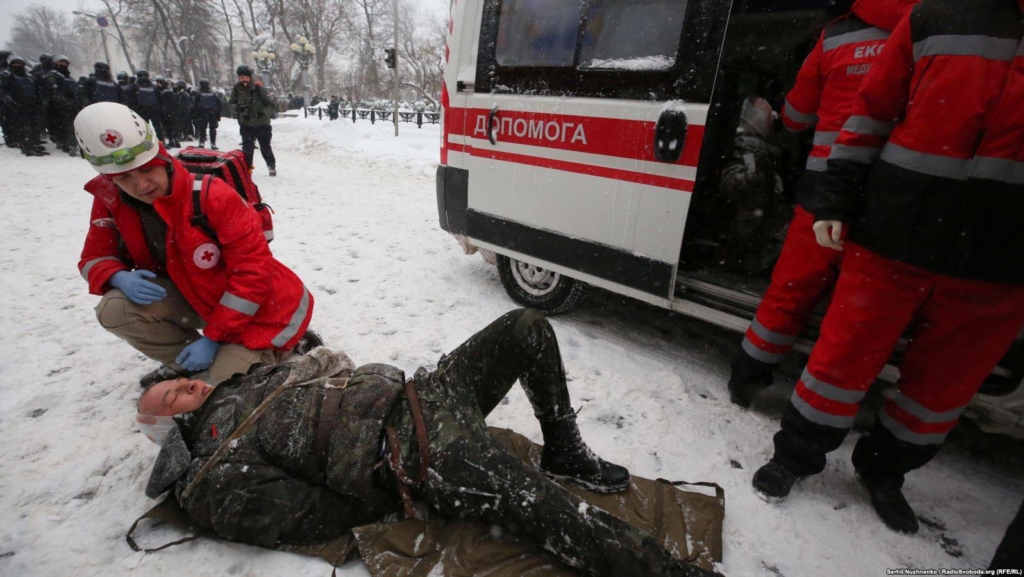 An injured protester is treated by medics in front of the Verkhovna Rada on March 3.

Instead of accepting those absolutely legitimate demands, the government ignored them and crushed the movement with brute physical force in a Kremlin-style way.

Poroshenko launched the whole drama by stripping his major political enemy and ex-Georgian President Mikheil Saakashvili of his citizenship when he was abroad in July and illegally refusing to let him back into the country in September.

Saakashvili’s lawyers, as well as independent ones, have told the Kyiv Post the cancellation of his citizenship violated Ukrainian and international law and due process. Moreover, stateless permanent residents of Ukraine have a right to enter the country without a visa, under Ukrainian law.

Moreover, five Saakashvili supporters have been charged in criminal cases linked to what the authorities believe to be his illegal crossing of the border.

In October and November, Ukrainian authorities deported seven Georgian associates of Saakashvili to Georgia without court warrants, which is illegal under Ukrainian law. They are still refusing to provide the legal grounds for the annulment of their residence permits and deportation.

In December, the authorities opened a criminal case against Saakashvili, the protest movement’s most outspoken leader, accusing him of plotting a coup d’etat. They tried to arrest him without a court warrant three times, which was even recognized as unlawful by Kyiv’s Pechersk Court, which released him from custody.

On Feb. 12, Saakashvili was violently detained and illegally deported to Poland without a court warrant, again in violation of the law.

March 3 was the final act of the drama: the protest tent camp was brutally destroyed, without a court issuing a warrant banning the protest. 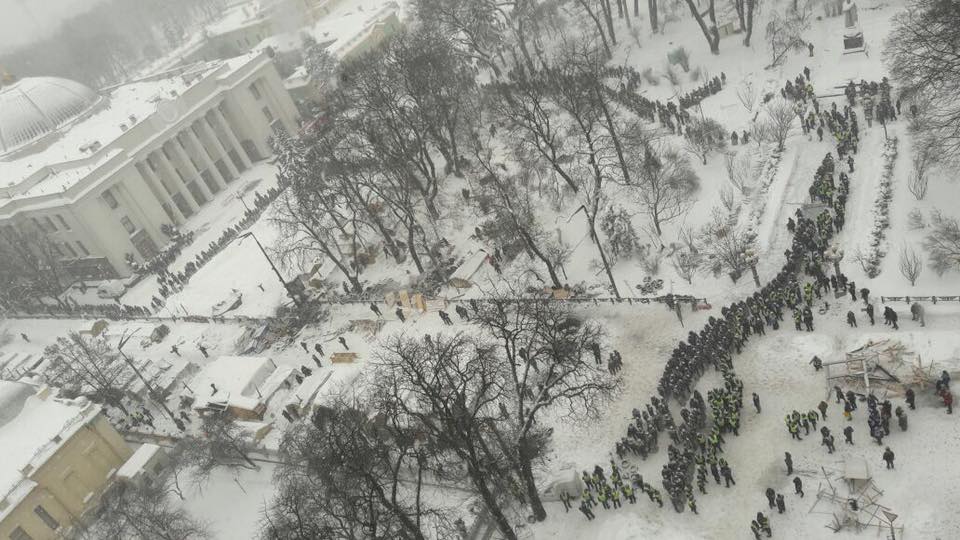 An aerial view of the police crackdown on the tent camp in front of the Verkhovna Rada on March 3.

The protest movement was crushed not by a benign European reformist government, but by one accused of large-scale corruption and of blocking reforms. That is why any parallels with police behavior in Western countries are unjustified.

It was crushed by Avakov, whose own son has been officially charged by the National Anti-Corruption Bureau of Ukraine in a Hr 14 million corruption scheme and arrested – before being released without bail.

In a video recorded by the Security Service of Ukraine and recognized by courts as genuine, Avakov’s ex-deputy Serhiy Chebotar, the Interior Ministry’s State Secretary Oleksiy Takhtai and state firm Spetsvervis CEO Vasyl Petrivsky, an ex-aide to Avakov, negotiate a corrupt deal to sell sand at a rigged auction in Chebotar’s office.

In the video, Chebotar says that Avakov is also aware of the deal and is worried that the sand has not been sold yet. Petrivsky has pled guilty and has been convicted in a theft case for selling the sand.

And the investment bank ICU, headed by the president’s personal banker Makar Paseniuk and ex-National Bank of Ukraine Chief Valeria Gontareva, served as a broker for Yanukovych ally Serhiy Kurchenko’s corruption schemes, according to a Kramatorsk court ruling.

It remains to be seen whether the crushing of the protest camp signals the reinstatement of an authoritarian system in Ukraine. But the signs do not look good.