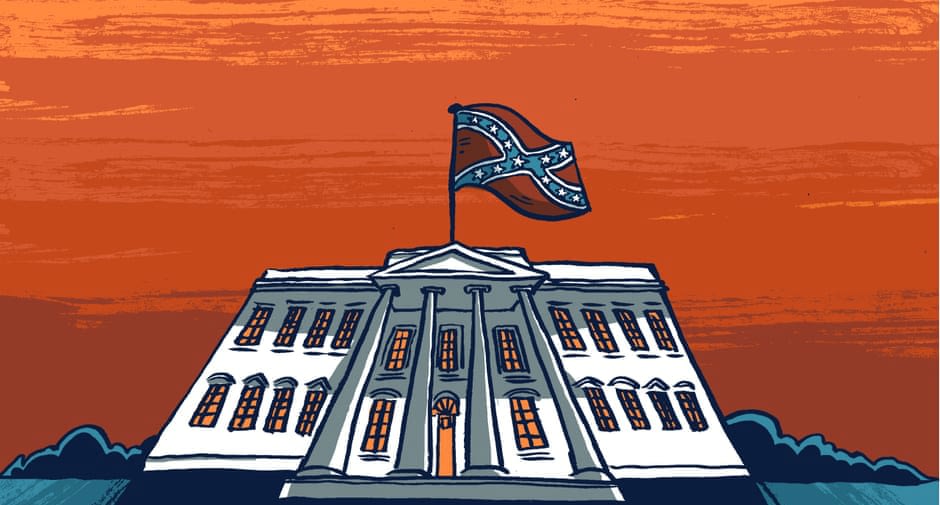 His supporters hark back to an 1860s fantasy of white male dominance. But the Confederacy won’t win in the long run. In the 158th year of the American civil war, also known as 2018, the Confederacy continues its recent resurgence. Its victims include black people, of course, but also immigrants, Jews, Muslims, Latinos, trans people, gay […]

“Settle your quarrels, come together, understand the reality of our situation, understand that fascism is already here, that people are dying who could be saved, that generations more will die or live poor butchered half-lives if you fail to act.” — George Jackson Twenty-two months into the Trump administration, the United States is a country […]

An FBI indictment of four American white supremacists belonging to the Rise Above Movement (RAM) in connection to violence they committed in Charlottesville, Virginia, and California in 2017 revealed that they had previously traveled to Ukraine to get training from a neo-Nazi militia. The four men, who all hail from California, were “among the most violent […]

What does United States of America stand for nowadays if political division is at an all time high? Is it still the land of the free if America has the highest rate of incarceration in the world? Are we still the home of the brave if we refuse to stand up to injustice, because it […]

Massive corruption in Rio de Janeiro’s disastrous Public/Private transportation partnerships brought an end to decades of MDB party hegemony, but the power vacuum that it opened was filled by neofascists. When the June, 2013 protests against bus fare hikes and lack of quality public transportation rocked Brazil, protesters in Rio de Janeiro had a clear […]

A week ago, Israeli Prime Minister Netanyahu told Likud officials that “occupation is nonsense”. This is a continuation of a right-wing spinning of history that says that Israel is not an occupying power. Then Netanyahu went further, to speak with clear fascist eliminationist undertones: “Occupation is nonsense. Empires have conquered and replaced entire populations and no one […]

POLITICIANS LOVE TO tell us every election is the “most important of our lifetime.” With Donald Trump in power, it rings true for many voters. This week on Intercepted: Journalist Chris Hedges has spent the past 15 years trying to ring the alarm about the dangers of the U.S. political system and the impact of a […]

More than 200,000 people are estimated to have taken part in a controversial independence-day march through central Warsaw on Sunday, after a last-minute agreement was struck between senior politicians and the event’s far-right organisers. The March of Independence, organised by nationalist and far-right groups and held annually in the Polish capital on 11 November to […]

The line between the far right and “mainstream” conservatism is rapidly crumbling. But the two were never very far apart in the first place. If you go by most of what you see in the media, you would think politics is governed by some strange version of Newtonian physics. “Both sides” are perennially to blame, […]

The United States has spent over a century meddling in Latin America. Recent crusades against corruption in Latin America are only the latest chapter. Today Brazil is on the front lines of the US battle to re-establish its hegemony in the region. When you study Latin American history, as I have for well over a […]

Early Saturday, moments before the police say he barged into a Pittsburgh synagogue and opened fire, Robert Bowers’s anti-Semitic rage finally boiled over as he posted one last message online. But he did not turn to Facebook or Twitter. Instead, the man accused of killing 11 people went to Gab, a two-year-old social network that […]

For two generations, Israeli politics has been riven by one question: the future of the West Bank. A loose coalition of right-wing factions, nationalists, and religious parties wants to keep the territory conquered in 1967 and settle it with Jewish civilians, and an even looser coalition of leftists, liberals, secularists, and Arabs opposes this. For […]