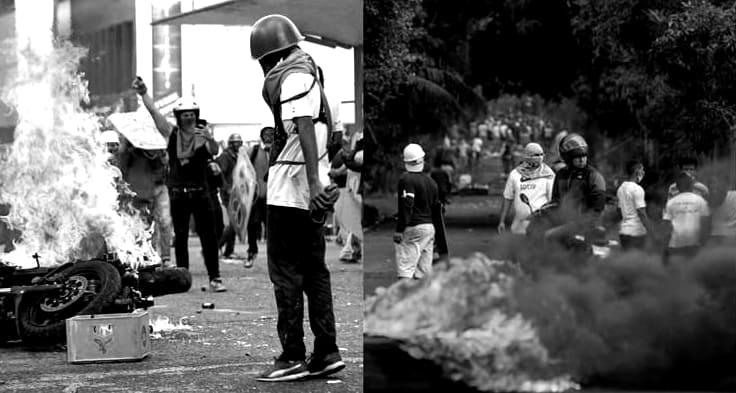 Political analyst and advisor to President Chavez, Fernando Bossi, looks at the striking parallels between the reactionary offensives in two Latin American countries. Argentinian internationalist Fernando Bossi has a lifelong commitment to Latin American unification that has expressed itself in diverse educational and political projects. Among these were the People’s Amphictyonic Congresses that took place […]

the National Front in Newham, Wood Green and New Cross; she helped organise marches after the murder of Altab Ali in Whitechapel; she participated in neighbourhood police-monitoring groups, at a time when the Metropolitan police faced intense criticism from black and Asian community groups for its failure to adequately investigate racist murders, its protection of the […]

From late April through early July, thousands of Nicaraguans marched in the streets, barricaded roadways, and occupied universities. All the while, they chanted their movement’s ubiquitous slogan: “Ortega y Somoza son la misma cosa.” In English, and without the clever rhyme, it means: “Ortega and Somoza are the same thing.” It draws a parallel between […]

A 65-year-old New York City cab driver from Queens, Nicanor Ochisor, hanged himself in his garage March 16, saying in a note he left behind that the ride-hailing companies Uber and Lyft had made it impossible for him to make a living. It was the fourth suicide by a cab driver in New York in […]

The article argues that, after 45 years of ‘neoliberal destruction’, the time is ripe for moving forward with the adoption of a new set of progressive economic policies (beyond those usually associated with classical Keynesianism) that will reshape advanced societies and the global economy on the whole by bringing back the social state, doing away […]

BY Mark Townsend and Toby Helm

Ex-Cameron aide and Muslim leaders join condemnation over the former foreign secretary’s burqa comments. A Tory peer and former aide to David Cameron accused Boris Johnson of “moral emptiness”, casual racism and “courting fascism” as division over the former foreign secretary’s comments about Muslim women threatened to develop into a full-blown crisis for Theresa May and her […]

Chinese AI technology provides a blueprint for autocracies around the world. Chinese artificial-intelligence startup CloudWalk Technology signed a deal in March with the Zimbabwean government, providing the authoritarian regime an advanced facial-recognition system that it can use to identify, track, and monitor citizens. In exchange, CloudWalk gains access to the facial data of the demographically […]

In a recent episode of “On Contact,” host Chris Hedges and activist Shehla Rashid Shora discuss Hindutva fascism in India and draw parallels to the current situation in the United States. “Caste slavery is fascism,” says Rashid Shora, the face of the student movement in India, in conversation with the Truthdig columnist. “It is not […]

The time has arrived for some moderation and clarity in thinking about contemporary Russia and its relationship to the Western world.  Ronald Reagan was not wrong in the 1980s to call the Soviet Union an “evil empire.” Its death in 1991 was a welcome victory for liberty, peace, and political civilization. But post-communist Russia is […]

In Greece, a mob assault on a liberal mayor offers a disturbing view of where the current uptick in right-wing extremism can lead. Yiannis Boutaris stared back at a sea of angry faces on May 20—a few muttered insults. Boos erupted from pockets of the crowd. “Leave,” they demanded. The 76-year-old winemaker-turned-mayor’s body tensed: “I […]

On Saturday night, in front of a crowd of 80,000 and to chants of “Free Lula”, Chico Buarque and Gilberto Gil sang the legendary protest songCálice for the first time together since 1973, on a night when Military Dictatorship censors turned off Buarque’s microphone. It was a highlight of an evening with poetry and political speeches, […]

Two important events happened towards the end of the third week of July in Israel: The ethnocratic settler-colonial state of Israel passed its new Jewish nation state law, which has been in the making for over two years now, and Hungary’s anti-Semitic Prime Minister Viktor Orban made a two-day visit to Israel. Despite the international uproar over the […]